CEOs and Boards of Directors – Friends or Foes?

Jeff Donahue is a good friend and battle-scarred veteran of venture-backed and private equity-backed companies. He has raised over $275M of funding for early and later stage startups and has been CFO of 10 emerging growth businesses. He's worked across the table from leading investors like GRP (now Upfront Ventures), Invesco, ComVentures (now Fuse Capital), Allegis Capital, Alta-Berkeley, Invision, Steamboat Ventures and many more. I'm thrilled that he's offered to write a Venture Financing Series. Without further ado, here's episode four. You can read episode one through three here.

In prior posts I have conveyed the importance of a proven CEO and his or her team in attracting venture capital funding. A “proven” CEO is one who has led one or more start-up companies to bountiful exits in prior incarnations, to the enrichment of VC investors.

A seasoned CEO and the team are way up the list of criteria that make funding easier. As a benchmark, I’ve heard multiple VCs observe they attribute up to 50% of a company’s initial valuation to the CEO and the team. Of course, unproven CEOs and their teams do attract venture capital funding – pervasively so. It’s just a matter of the degree of difficulty of the dive.

I remember attending a program in San Diego some years ago where the featured speaker was a young entrepreneur whose previous company scored a superb exit. He had launched his new company and mentioned he landed $6M of Series A funding on the back of just a 15-slide PowerPoint deck. Because of his prior success, investors believed in him and virtually threw Series A cash at him for his new company.

While nothing makes a VC happier than a big exit, we all know that the vast majority of start-ups fail. Close to them are neo-failures – start-ups that turn into lifestyle companies which are cash flow self-sustaining but cannot achieve the scale and scope that support an IPO or trade sale. [Hence, the VCs are left with no exit opportunities.] The question to ask is, “Why do so many start-ups fail even after securing huge amounts of funding over multiple rounds?” 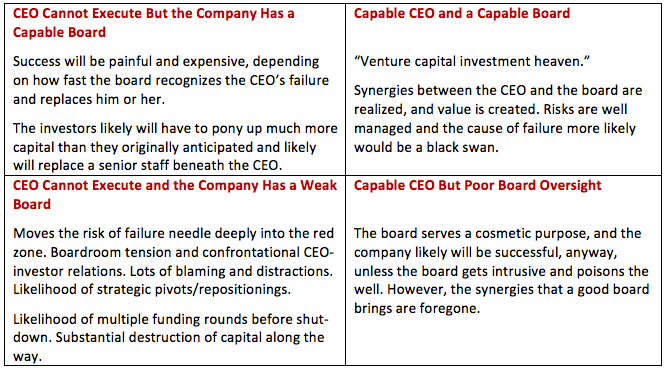 Of course, there are degrees of CEO execution ability and board oversight in the schematic.  It is just a matter of “flow” between the CEO and the board over time.

Also, beneath this schematic is the potentially worst case outcome: one of VCs becomes the CEO, and the VC-CEO brings other members of the firm into the management team. If the VC isn’t an experienced CEO (more about that below), then you can bet it is going to be a hard, painful, expensive and very low-probability road to success, saturated with Sturm und Drang along the way.

The issue of CEO execution ability is one reason why some VC firms maintain “entrepreneurs in residence” (there are variations on that designation) to work with their portfolio companies, particularly ones with younger and/or unproven management teams. Perhaps more VC firms should do that. Another risk-attenuating factor is where the board-member VC has been a successful entrepreneur. Mark Suster at Upfront Ventures comes to mind, who as a successful entrepreneur in multiple incarnations by definition has a leg up in board oversight. However, I come back to my mantra of qualifying VCs and, by extension, qualifying whoever they might designate to work with a CEO.

What does “execution” (or “performance integrity,” as I also like to call it) mean? It means fulfilling the vision through leadership that dynamically aligns strategy, design, research, development, engineering, manufacturing, supply chain, logistics, financing, sales, customer service, marketing and business development and a raft of other things. These are the levers a CEO pushes and pulls in making a company successful. [Software and social media companies have an attenuated array of levers, e.g. no manufacturing, supply chain, logistics and the like, which along with comparatively low funding requirements is why they are so attractive to entrepreneurs and VCs alike.] At the end of the day, the CEO very much is like an orchestra director: under great direction the orchestra produces beautiful music. Without it, the orchestra degrades into producing cacophony.

Another way to look at execution is in the context of a great mission statement. A great mission statement embodies what the company does for a living, where it is going to be in a certain point in time, where it will stand vis-à-vis the competition, and what the quality of the business will be. For example, “Company Alpha will be the number 2 producer of 3D printers in the United States in 5 years with sales in excess of $700M and EBITDA margins above 40%.” This simple sentence captures everything that a CEO needs to accomplish. Mission statements that say things like, “Company Alpha is going to be a leading 3D printer that cares for and is loved by its employees, customers, shareholders and communities” are just tedious bullshit.

Together, CEOs who execute and boards who provide constructive oversight build value beyond expectations.  I will have more to say about honing execution skills in a future guest post. Recommended further reading is Brad Feld’s and Mahendra Ramsinghani’s new book, Startup Boards: Getting the Most out of Your Board of Directors.
Posted by Eliot Peper